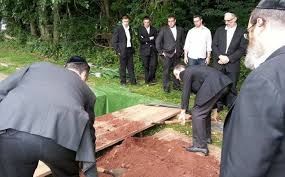 Funerals can begin at the funeral home before going to the cemetery where the service is performed. It is advisable to dress properly and turn off your cell phone. Men should dress in a nice, clean suit. Women should wear a modest skirt. A black dress code is generally used in most Jewish graves. Men are also advised to cover their heads.

The coffin (in Israel, the custom is to be buried with a talit) remains closed for the duration of the service because it is forbidden to look at the deceased. The funeral will start with Hesped which is part of the program where you can hear the praise of friends and family members of the dead before performing special prayers. Levaya is the next practice after prayers where the body is transported to its last resting place.

Family members of the deceased will bring comfort in the end by praising God publicly. They will express their wish to see the reign of God on earth. The type of prayer said at the funeral has additional lines intended to show the expectation of the arrival of the Messiah and also of the resurrection of the dead.

Once the deceased has been honored, all attention is turned to those in mourning by performing the Mitzvah or the command of nichum avelim . This command aims to comfort those who have lost a loved one. Those present at the funeral will form a line, and those in mourning will pass by chanting "May the ubiquitous God comfort you and the other mourners of Zion and Jerusalem" in Jewish.

When you scatter one, the funeral will be over, you will hear people say "oyf simches" which simply means "meet during happy times." Mourners wash their hands before returning home after leaving the funeral. Most cemeteries will have taps outside. Wash your whole hands. Just like the custom of the shovel, the washing cup does not pass directly from one person to another. It must be placed upside down in a specific location before the next person takes it. You are also not allowed to dry your hands after washing. The next six days will see the bereaved go through Shivah. It is during this time that they comfort and sympathize with the bereaved.