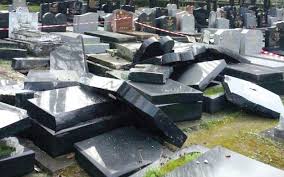 Earlier this year, a group of European rabbis, Jewish law experts or Jewish religious leaders, held a conference in Riga, the capital of Latvia. The main reason for holding this conference was to discuss how to strengthen the Jewish community and its beliefs. A sensitive and burning issue that was raised at their meeting was the vandalism of their graves in Paris and the removal of the remains by the city council.

Natan Kahan, rabbi and editor-in-chief of the French magazine of haredi, has been following the case for several years. He explained to the other rabbis the complex nature of the current case. It came to their understanding that one can only buy land for burial for a limited period in accordance with the municipal laws of Paris. The time usually ranges from 5 to 100 years. Once they have passed, the city authorities are authorized to recover the land by destroying the graves and removing the remains there.

The only option that should be avoided is to buy the plot again for other additional years. Rabbi Kahan also added that the municipal council has the power to recover abandoned graves or those that have not been visited for more than three years in accordance with French law. The law also prohibits Jews from creating cemeteries reserved for Jews, but they are allowed to establish their own quarters in various public cemeteries.

It is estimated that French authorities have recovered graves since the early 1950s and that the city's warehouse has more than 10,000 skeletons, of which the rabbis claim that a larger part of them are Jewish corpses. Haim Korsia, the chief rabbi in France and the vice-president of the conference and the deputy Moshe Levin, a rabbi and a leader of the conference, are very interested in this sensitive and complex issue. Rabbi Korsia said he held a meeting with Paris mayor Ann Hidalgo and agreed that those who lost their lives before the Second World War should not be exhumed from their graves.

He said those who died during this time have had no living relatives since their descendants were killed during the Holocaust. Their names were also destroyed during the process. "Most Jews around the world insist on finding legal or constitutional solutions for the burial of Jews in the French capital," said Pinhas Goldschmidt, president of the conference of European rabbis. He also added that families should be allowed to bury the remains of their loved ones exhumed in their graves in France or to send them back to Israel for burial.

The rabbis' council insisted that the Paris authorities comply with their demands. Later, they formed a committee composed of three rabbis who will meet with the rabbi of Paris. They will inform the Parisian authorities to present a list of those who are at risk of being exhumed and those transferred from their graves to the city’s warehouses. They also urge the descendants of those who have died to visit their graves and ensure that they are well maintained. They should also stay in touch with municipal authorities.