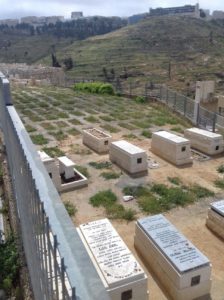 When Carole Nino's father died a few years ago, he realized that the coffin buried in a cemetery in Paris would not be there for long. Nino, a school principal in Paris, said their tomb was bought more than 30 years ago. The plots will be sold for a limited time due to the shortage of graves in France.
Families who do not renew their agreed contract will have to make an additional payment, or the body of their loved one will be removed from the tomb before being buried in a mass grave. Nino decided to settle the matter by bringing his father's remains to Israel for burial. He admits that they never talked about death in their family and that their late father never said how or where he would like to be buried. He then joined other family members to bury their late father in Ashkelon, Israel.
The story of Nino's father is just one of the thousands of foreign residents who made the return trip to Israel. Reports from the Israeli Foreign Ministry indicate that the number of those who died in foreign countries and who were then buried in Israel increased to 1,590 in 2016 from the 850 recorded in 2007. This includes Israelis who died during their vacation.

Ya’akov Zvi Levin and Miriam, who have visited Israel over the years, have decided that Israel will be their last resting place. Their graves in the Mount Scopus cemetery in Jerusalem have been there since the early 1990s. Their parents, who visited their graves at a later date, said they made sure to buy their plots early. Many American names can be found in the Israeli graves followed by France, Britain, Canada, Belgium and Russia in that order. Many Jews believe that being buried in Israel will give them a direct pass to heaven, but Rabbi Jacob Ruza differs by saying that the location of the dead does not matter in the second coming of the Messiah.

Several companies involved in bringing back Jews who died abroad from the funeral have sprung up in recent years. They insist on giving the deceased's Jewish families the peace of mind they need and also ensure that others are buried in their country of origin. However, some Jews insist that their bodies be cremated and ashes buried in Israel, according to Alon Native, who is the general director of the lay funeral corps. Jerusalem has the highest record of burials for foreigners compared to other places. Jews from foreign countries prefer Jerusalem as the final resting place, says Chananya Shachor. Many of them buy their graves while they are still alive.

Money is still a key consideration among many Israelis who have covered their burial costs. The prices of burials also vary according to burial places and the services offered. The high prices of burials have been a concern in various parts of Israel due to the lack of land or sufficient space to bury. This even sparked a debate in the Israeli Legislative Assembly, popularly known as the Knesset due to the fact that according to statistics the reduction in the number of plots sold to foreigners has been decreased. The bill did not pass. Many foreign Israelis have taken and continue to take matters into their own hands to ensure that their family members are buried in their native Jewish country.